Videographer for Live from Bloomington (2011)

Matt attended The College of Santa Fe (now Santa Fe College of Art & Design) from 2007 until 2009, studying film production, and finished his BA in Communications & Culture at Indiana University in 2011. He currently attends graduate school at Herron School of Art & Design. Since 2009, he has focused on visual art, screenwriting, filmmaking, and interactive installation work. From 2012 until 2014 he served as lead videographer for RAW Artists in Indianapolis.

In April of 2015, Matt received first place in Downtown Indy’s “We Welcome All” $5000 video challenge, and his entry was featured on their website to promote growth in Indianapolis.  From 2011 until 2014, he worked as a painting instructor at Mimosa & a Masterpiece, and has showcased artwork at the Murphy Building in Fountain Square as well as The Landmarks Gallery, DO317 Lounge, the Broad Ripple Art Center, and The 5547 Gallery in Irvington, among others. In 2014, Matt was selected to participate in ORANJE fest, and has also exhibited work in Fountain Square Brewery’s Hop Your Face, The Holiday Art Bazaar, and The Hullaballoo festivals. In January of 2016, Matt was selected as solo exhibition artist for The Attic Gallery in August, sponsored by DO317, and was awarded NUVO Magazine’s “Best of Local Visual 3D Artists” award in June of 2016.

Matt has written two novels, several screenplays and short stories, a poetry anthology, and a stage play. His poetry has been published by KNACK Magazine and The Pine Grove Literary Review, and in 2013 his short story “Sounds of Silence” was published by The Saturday Evening Post as a finalist in their Great American Fiction Contest. Most recently, his debut stage play “MetaStasis” won Kaos Company Theatre’s 2015 Dionysian New Play Awards contest, produced in May 2016.

Since February 2017, Matt has been a co-founder, head art curator, and installation artist for HEALTHNET, a new collaborative art/music space in Fountain Square. 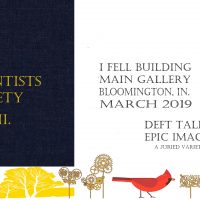