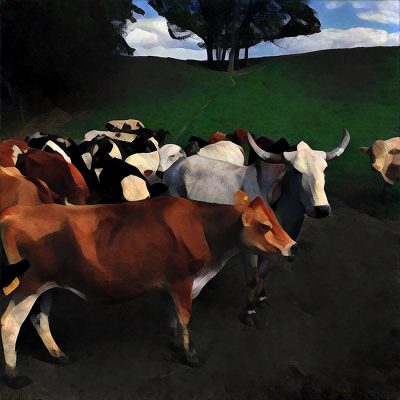 Richard Parker is a fine artist who was born, raised, and lives in Indiana. He began drawing when he was three and the focus of his youth was on art, writing, the outdoors, and sports. He graduated from North Central High School in Indianapolis and then from Wayne State University in Detroit, Michigan, with a BFA Degree and a double major in Advertising Design and Psychology. He spent his entire first career as a creative professional in advertising and marketing.

While at Wayne State, he

Richard Parker is a fine artist who was born, raised, and lives in Indiana. He began drawing when he was three and the focus of his youth was on art, writing, the outdoors, and sports. He graduated from North Central High School in Indianapolis and then from Wayne State University in Detroit, Michigan, with a BFA Degree and a double major in Advertising Design and Psychology. He spent his entire first career as a creative professional in advertising and marketing.

Richard won over 1,500 awards for creative excellence in his advertising and marketing career for his clients and has also been a noted speaker, creative judge, songwriter, and musician. In his creative career, he has worked with and directed some of the best photographers, artists, and directors in the world. Richard was also the original founder of Synapse Technology, the First Intelligent Commerce Company. The company was a pioneer in utilizing advanced technology, data, marketing strategy, and creativity to serve Fortune 500 companies all over the world. Synapse was named one of North America’s fastest growing technology companies 5 years in a row in the Deloitte & Touche and PriceWaterhouseCoopers FAST500.

As a serious participant in many sports activities throughout his life, Parker enjoyed baseball and softball and participated in the New York Mets Dream Week where he was recruited to play on the Mets traveling Dream Team. As a hockey player, he played with traveling teams in the mid-west and on the east coast and in the first Philadelphia Flyers Dream Week in Montreal. Richard also was a Senior Expert AMA Motocross racer for a number of years. And he fulfilled his boyhood dream to become a professional race car driver by earning SCCA PRO and International Motor Sports Association (IMSA) licenses and raced at Sebring, Road America, Mid-Ohio, Sonoma, Road Atlanta, and other top road courses all over the U.S. Richard competed in the American LeMans Series and its Formula Mazda North American Championship as well as other noted racing series winning his very first race and three more and placing very well in many events.

Richard has been working on his artwork for the past several years and has pursued his goal of being a fine artist by becoming a Juried Artist Member of the Hamilton County Artists Association (HCAA) and an Artist Showcase Member of Nickel Plate Arts in Hamilton County, Indiana. He specializes in digital art. And his focus has been in discovering the natural beauty of the farms, small towns, river and streams in the Hamilton County countryside where he works and lives with his lovely wife, Marybeth, and their three dogs. He plans on expanding his subject matter by doing more people studies, still lifes, and creating new ways to present his art in the most innovative and unique style possible.

Parker’s first presentations were at the Equine Arts Guild Show at the Nickel Plate Art Gallery and the HCAA Juried Artist Show at the Birdie Gallery, both in Noblesville, Indiana. He recently had a one-man show at the NOBLE MADE GIFTS Gallery on the Square in Noblesville and has had an Artist Showcase one-man show at the Nickel Plate Arts Campus in the Stephenson House Gallery in 2019. He’s also had a display of his work at the Cicero Coffee Company throughout last July. Last, but certainly not least, Richard was just announced in the Artists Magazine April 2019 issue and on ArtistsNetwork.com as one of the “Top 10 Artists Over 60 in America” with his winning submission, OVERHERD.