Creative Renewal Arts Fellow - In 1999, the Arts Council of Indianapolis, with generous support from the Lilly Endowment, established the Creative Renewal Arts Fellowship program. Originally conceived as a renewal opportunity similar to an academic sabbatical, this groundbreaking initiative offers mid-career artists and arts administrators the opportunity to renew and refresh their creativity. In it's 9th round, the fellowship offers 30 artists and arts administrators $10,000 for an 18 month fellowship period.
Comment 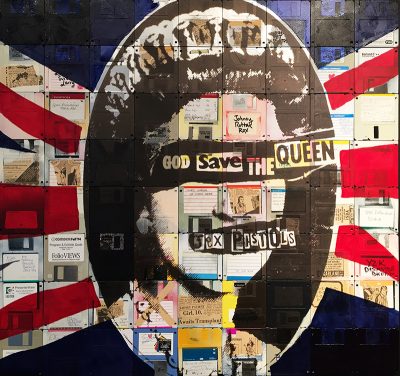 I received my degree from Indiana University (Bloomington), and studied at the AdBK (Akademie der Bildenden Künste) in Berlin and Nürnberg, Germany. I moved to Germany to study painting and sculpture, however I found employment and continued my studies in Berlin and Nürnberg until returning to the United States some years later.

Some recent collaborations include the Mondavi Family’s Charles Krug Winery in Napa Valley and a large-scale, world-wide project with Carnival Cruise Lines.

I received my degree from Indiana University (Bloomington), and studied at the AdBK (Akademie der Bildenden Künste) in Berlin and Nürnberg, Germany. I moved to Germany to study painting and sculpture, however I found employment and continued my studies in Berlin and Nürnberg until returning to the United States some years later.

Some recent collaborations include the Mondavi Family’s Charles Krug Winery in Napa Valley and a large-scale, world-wide project with Carnival Cruise Lines.

In the historical arc of my work, I have primarily focused on painting and I have sought to combine abstraction and figuration with elements of molecular science, traditional still life and portraiture. To accomplish this, I not only find myself using a wide variety of materials and mediums including discarded analog technology and industrial objects, but also incorporating mathematics, organic chemistry, mechanics, film and photography into a work that has greater personal meaning than the materials used to make it.

In 2013-2014 I was awarded a Creative Renewal Arts Fellowship administered by the Indianapolis Arts Council and funded by the Eli Lilly Endowment. During this fellowship I began to work with found vintage 8mm film and other analog mediums to blend the practice of filmmaking, digital video and painting. Through the work I explored in my CRAF, I created a 54 minute experimental film which references time, memory and undertaking a personal journey. I combined antique photographic process, chemistry, silkscreen and film for this body of work. The film I created was formed of a pastiche of found vernacular footage, my family’s vintage Super8 and 8mm home movies and clips which I shot in recent years with both 8mm film and an iPhone 6. I used digital editing software to weave these various moving images together into an intentionally disjointed whole, referencing memory and personal history. The resulting films are characterized by a pace and rhythm that is fitting for the Internet Age but give a sense of history and loss. Through them, I am exploring the power of memory, family history, community and contemporary art.

Currently I am working on a series of paintings that are created on custom panels of 3.5 inch obsolete floppy diskettes and feature abstracted portraits of iconic figures. The paintings and accompanying films I create reference contextual memory, changing technology and art history. Vintage film footage of my family accompanies deteriorating vernacular film footage and new scenes from my studio during the creation of the new paintings to form a moving dialogue to serve my own narrative. By blending and splicing vintage 8mm footage into a reordered narrative, I am also referencing community and our relationship with others whom we have never met but hold, perhaps, many things in common.

My recent paintings explore the relationship between abstraction, still life, portraiture and memory, increasingly through the use of analog technology materials. Ultimately my intention is to blend painting with elements of technology, chemistry and mechanics to create a dialogue about time and memory that involves the arts, sciences and technology. 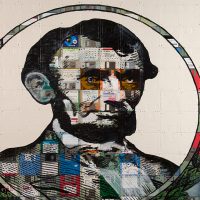 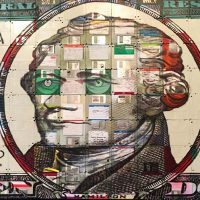 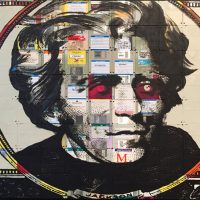 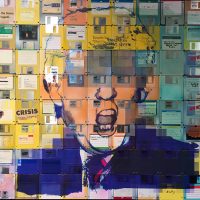 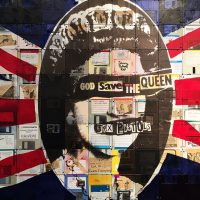 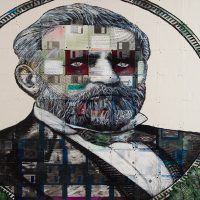