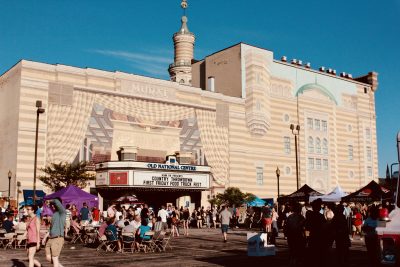 Old National Centre is looking to involve local artists’ work in their new Music Poster Art Project. This project will highlight local Indy artists as well as local musicians. The project’s goal is to honor and keep alive the history of musicians that have helped build Indianapolis throughout the years, especially the BIPOC Jazz Musicians of Indiana Avenue and its surroundings. Old National Centre is looking for enthusiastic music lovers to recreate old vintage posters of iconic Indianapolis music legends with a modern twist to highlight Indianapolis musical history.

Artists interested will create an original commission artwork in a poster-style design with the size of 11.5X17.5. The poster should have a simple yet creative and narrative feel to it. Artists will choose a Music Legend from the Indianapolis Music Legend List. The poster look should be a simple representation of who the legend was and why they were important in Indy.

Artists will work with their chosen legend in their preferred medium. All mediums are eligible and must result in 2D artworks, safe to put under glass. The artwork will be on display behind a frame for protection on the walls of the Deco Lounge leading to the Deluxe music venue inside the Old National Centre.

All artists are encouraged to apply. The final poster artwork can be reproduced as a print in the required size only if the original work cannot be displayed in a flat 2D form.

The following list is composed by Kyle Long, Music Journalist/Producer of Cultural Manifesto and Echoes of Indiana Avenue.

R&B vocalist Mildred Elizabeth Cummings, better known as Little Miss Cornshucks, was born in Dayton, Ohio, in 1923. But she spent the majority of her life in Indianapolis and played some of her earliest gigs on Indiana Avenue. Little Miss Cornshucks was an influential figure in the development of R&B music. Atlantic Records president Ahmet Ertegun called her “the best blues singer” he’d ever heard.

Vocalist and bandleader Anne Mae Winburn was born in Port Royal, Tennessee, and grew up in Fort Wayne, Indiana. Winburn played some of her first professional gigs in Naptown and became a familiar presence on Indiana Avenue as bandleader for the International Sweethearts of Rhythm. The Sweethearts played many gigs at the Avenue’s Sunset Terrace during the 1940s,

Ebony Rhythm are remembered for their heavy funk sound, which mixed psychedelic rock with soul – as heard on their classic 1973 self-titled debut. The group scored a Billboard hit in 1975 with their single “How’s Your Wife (And My Child)”. Ebony Rhythm continue to record and perform in Indianapolis today.

The Pearls were a popular Indianapolis girl group during the late 1960s. The Pearls recorded for Lamp Records. Pearls’ Vocalist Denise Grissom went on to sing with Stevie Wonder, and Pam Tanner went on to join Ebony Rhythm Funk Campaign.

Wes Montgomery is perhaps the most iconic jazz musician to emerge from Indianapolis. Montgomery accumulated multiple Grammy awards and hit records, and redefined the sound of the guitar in jazz music.

Ophelia Hoy was a popular nightclub singer in Indianapolis for decades. Hoy is particularly remembered for her partnership with blues legend Champion Jack Dupree at Indianapolis’ Cotton Club in the early 1940s. Sadly, there are no known recordings of Hoy.

Errol Grandy was an influential pianist who has been called the “dean of Indiana Avenue”, and the “godfather of Indianapolis jazz”. Grandy was given the nickname “Groundhog” because he was partially blind. Grandy was known for his advanced knowledge of music theory, and he provided informal music lessons to Indianapolis musicians like Wes Montgomery and J.J. Johnson. Sadly, Grandy never recorded commercially.

R&B vocalist Thurston Harris was the most significant Indianapolis musician of the rock and roll era. Harris is best remembered for his 1957 hit “Little Bitty Pretty One”.

Jazz saxophonist Jimmy Coe had a long career in the Indianapolis music scene – performing from the 1930s, until his death in 2004. Coe is best known for his work in jazz, but he made significant contribution to Indianapolis rock and roll, and R&B. Coe is remembered today as an icon of Indiana Avenue.

Saxophonist James Spaulding never became a solo star, but he performed on many important East Coast jazz albums of the 1960s – including sessions with Wayne Shorter, Pharaoh Sanders, Horace Silver, and Max Roach. During the 1950s, Spaulding was an early member of the legendary Sun Ra Arkestra.

During the 1960s Freddie Hubbard emerged as one of the top trumpet players in jazz music. Hubbard’s music ranged from bebop to funk, and he recorded with a wide range of artists including Chaka Khan, Herbie Hancock, and Billy Joel. Hubbard acquired multiple Grammy awards, and scored many hits during his career.

14. Baby Leon and The Presidents

The Presidents were one of the most popular R&B bands on Indiana Avenue during the 1960s. The group was led by Baby Leon, a dynamic vocalist and dancer who channeled the energy and style of James Brown.

The Vanguards were the star group of Indianapolis’ Lamp Records label. The Vanguards helped to put the Indianapolis soul scene on the national map with their classic 1969 hit “Somebody Please”. The song is propelled by the anguished vocals of James David, and remains a beloved soul ballad today – particularly within the Chicano community of Los Angeles, where the song has been covered extensively and translated into Spanish.

The Ink Spots came together in Indianapolis during the early 1930s. Their unique mix of rhythm and blues music, with group harmony profoundly influenced early rock and roll. To this day, the Ink Spots remain the only Indianapolis group to be included in the Rock & Roll Hall of Fame.

Amnesty were one of the most important Indianapolis funk bands of the 1970s. The group were known for their socially conscious lyrics, heavy funk rhythms, and soaring vocal harmonies. In recent years, Amnesty’s music has been heavily sampled by hip-hop artists including Snoop Dogg, Kanye West, and Jay-Z.

The King James Version were a stunningly unique psychedelic gospel funk act. They were known for their wild live shows, and distinctive look – the members died their hair platinum blonde, and performed in biblical garb. Their 1971 single for Soul Kitchen Records remains a cult favorite with record collectors.

Not to be confused with the Sun Records’ rockabilly artist, Carl Perkins was an important Indianapolis jazz pianist. During the early 1950s Perkins relocated to California, where he became an influential force on the West Coast jazz scene. Miles Davis once cited Perkins as one of his favorite pianists.

Tiny Brown was a popular R&B vocalist on Indiana Avenue during the 1940s and ’50s. She was billed as the “brown bombshell of rhythm”, a nod to Brown’s high energy performance style. Brown recorded a pair of classic singles for Capitol Records in 1950.

Be over 18 years or older

Live in Indianapolis or have a strong connection to Indiana Avenue

Be able to meet deadline requirements

Artists will be paid $500 for their poster created by the end of the Music Poster Art Project.

Please fill out the form by July 17 with the following information:

5 Images of past portraits no greater than 1bm

Top 5 “Legends” of your choice.

Artwork delivered to Old National Centre by September 10 or 11, 2022

The Artist’s Reception date will be later shared with the accepted artists.

For any questions about the Music Poster Art Project or the application, please send an email to gabyspotlight@gmail.com with the subject line “ONC Poster Question”.