Presented by Do 317 Lounge and Gallery at Do317 Lounge, Indianapolis IN 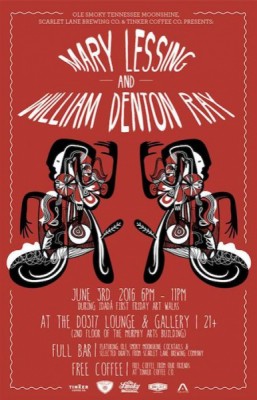 William Denton Ray was born in Indianapolis, Indiana in 1974. Ray is a mixedmedia painter and illustrator working with a variety of mediums. He also works as a Part-time graphic designer and freelances for a variety of clients. In 1992 William received a scholarship from the Columbus College of Art and Design where he focused on Ad Design. He later transferred to the Herron School of Art and Design where he concentrated on painting and drawing. He has had solo shows in Indianapolis and Boston as well as numerous group exhibitions throughout the country. William was a 2009 Stutz Residency Award Winner and has been involved in numerous Public Art Projects within Indianapolis. His artwork has been collected throughout the United States and throughout the world including France, Mexico, Australia and Canada.

William enjoys spending time with his family, drinking a variety of craft beer, listening to a variety of music, and creating his daily drawing series on the iPad. He creates his work at his home studio and his studio at the Harrison Center for the Arts. William draws inspiration from a variety of sources including Basquiat, Picasso, Miro, graffiti, classic skateboard graphics and music.

Mary Lessing
30% of her work will go to the Samaritan’s Purse charity.
http://www.samaritanspurse.org/

I make art because I have to. It is an integral part of who I am. When I am not creating, I am a depressed shell of a person that I do not recognize. Continuing to create means life to me. Coming out of college I was naïve like most young people. The struggle to make a living hit me like a truck, and in 2007 I took about a four year break from all art. It was dark and it was hard. I came out of it with a very different perspective. I no longer create to make a living. If that happens, it would be amazing, but it is no longer my aim. Now my work is better and I can focus more on what I really want to do. I want to keep creating on a regular basis and I want to find ways to use my gifts to impact others for the good.

Inspiration for me comes mostly through music, film, other artists, and tattoo and punk culture. Myfavorite artists are Chuck Close, Roy Lichtenstein, and Caravaggio. Movie characters from Wes Anderson movies in particular have been inspiring me lately. I think what fascinates me about them is how he conveys the deep sadness and hopefulness of nearly all of his characters. Although extreme, his characters really reflect on the complexity of life and of what it is to be human. We are all deeply flawed and we also all have a propensity for greatness.

The majority of my work is portraiture. Faces fascinate me. I could draw a million faces, all with two eyes, two ears, a nose and a mouth. What is amazing is that the slightest differences are what make up the likeness of each individual. Every face tells a story. Every line and every scar give us insight into who each person is, and what they have lived through. To capture and convey who a person is and how they feel is a powerful thing that we can almost all relate to it.

My work is unique in the way that I see and break down shapes in a portrait. Instead of trying to see and capture a whole face at once, I study and break it down into tiny pieces. A nose is not a nose, it is many small shapes made up of varying values of light and dark. My work is really a study of light and shadow and the tiny shapes that are created when light hits a face. My work is strange and meticulous, but I love creating it.