Presented by American Pianists Association at Columbia Club, Indianapolis IN 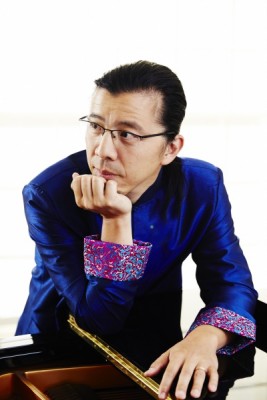 Tickets are $75 (brunch is included in the price of the ticket) and are available by calling the American Pianists Association at 317.940.9945 or by visiting www.americanpianists.org.

The Montagues and the Capulets

ABOUT FREDERIC CHIU
Frederic Chiu was the winner of the 1985 American Pianists Association Classical Awards. With over 20 CDs on the market, many of his recordings have been singled out, such as “Record of the Year” by Stereo Review, “Top 10 recordings” by The New Yorker, with raves from The Wall Street Journal and The New York Times. A new recording on the Yamaha Entertainment Group label, released in 2015, breaks new ground, introducing the first Classical recording to the YEG catalogue.
Frederic Chiu has toured extensively in Europe and the US and, in recital, performs in the world’s most prestigious halls. Mr. Chiu’s musical partners include Joshua Bell, Pierre Amoyal, Elmar Oliveira, Gary Hoffman, David Krakauer, Matt Haimovitz and the St. Lawrence, Shanghai and Daedalus string quartets. He recently premiered Edgar Meyer’s Concert Piece with Joshua Bell. He has worked with many composers, including George Crumb, Frederick Rzewsky, Bright Sheng, Gao Ping and David Benoit.
He was the recipient of the Avery Fisher Career Grant, the Petscheck Award of the Juilliard School, and was a fellow of the American Pianist Association. He was also the “non-winner” of the 1993 Van Cliburn Competition, where his elimination from the finals caused an uproar in the press.
Deeper Piano Studies, Frederic Chiu’s innovative workshop program, brings together pianists from around the world to study aspects of piano playing usually left uncovered. Articles in Piano Today and The New York Times have featured his original approach to learning and performing that draws on ancient traditions of philosophy and meditation combined with the most recent discoveries in psychology and acoustic sciences, using non-traditional techniques such as cooking and learning without using the instrument. After 12 years spent in France, Frederic Chiu returned to the United States, where any free time he can find is divided between writing, painting and cooking. He also co-directs artistic activities at Beechwood Arts, an arts immersion non-profit in Connecticut.

ABOUT THE AMERICAN PIANISTS ASSOCIATION
The American Pianists Association has been supporting aspiring young artists for over 30 years. Its unique Fellowships, both classical and jazz, offer significant opportunities for American pianists, ages 18-30, to advance their careers. Each Fellowship is valued at over $100,000 including cash awards, fees, publicity and recording opportunities. APA is proud of its assistance and innovative competition formats. All of APA’s competition events are produced as public recitals and feature the Finalists in a variety of settings. APA greatly values the individual artistic sensibilities of each pianist, very much wishes to nurture such individuality and does not impose any repertoire requirements during the competitions other than those necessary for the different genres. It is APA’s intent to focus on artistic expression and not on competitive prowess. Further, APA makes an effort to tailor its career assistance to suit the particular needs of the Fellow, offering an array of opportunities appropriate to the Fellow’s current career development and status. APA is not a management agency as such and do not try to be. Rather, APA strives to be the bridge between professional training and a full-fledged professional career.