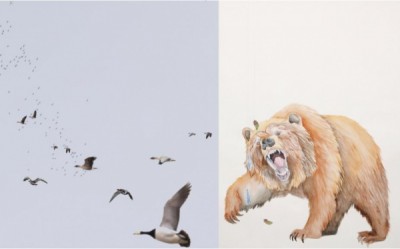 The exhibition Animal Umwelt brings together the work of Jenny Kendler and Molly Schafer as well as select works from the Endangered Species Print Project, which the two artists conceived in 2009.

JENNY KENDLER is a Chicago and Los Angeles-based interdisciplinary artist, environmental activist, naturalist, wild forager & social entrepreneur. Her intimate sculptures and interactive public projects have been exhibited nationally & internationally at museums and public venues, including the

The exhibition Animal Umwelt brings together the work of Jenny Kendler and Molly Schafer as well as select works from the Endangered Species Print Project, which the two artists conceived in 2009.

In One Hour of Birds Kendler invites the public to collaborate with her in creating the artwork itself. Participants in the project are asked to look through the lens of a camera for one hour, photographing every bird that comes through their field of view. As time passes, the exercise becomes one of pure seeing, engaging the senses in a way that is unusual in the contemporary world of speed and screens. The unedited hour of images are sent to the artist, who combines them in Photoshop using a simple set of rules—creating a single image of that hour of attentiveness.

The project asks us all, participants and viewers, to re-tune our senses to the non-human world, and reinvest in a more open awareness of nature. Viewed as it was by many participants as a meditative or healing practice, One Hour of Birds also suggests the possibility that an embedded and sustained awareness of the natural world can be a path to deep well being.

One Hour of Birds will grow as it is exhibited, and is continues to be open to contributions. Find more information at: JennyKendler.com

Schafer’s drawings are inspired by a stay on the the isolated Assateague Island, where she was accompanied only by her arctic-looking house cat and was able to enact her life-long longing to reside in a specific narrative – an orphaned girl, all alone in the wild save for an animal sidekick. This narrative can be found in novels like Island of the Blue Dolphins, Julie of the Wolves, Reindeer Moon and Bear Daughter. Most of these books do not have illustrations, only cover art, which is the inspiration for the narrative drawings Schafer created.

In 2009 Kendler and Schafer co-founded THE ENDANGERED SPECIES PRINT PROJECT, which has raised more than $14,000 for conservation. The project brings art and conservation together in the form of unique art prints that raise funds for conservation efforts. The ESPP creates limited-edition prints of endangered species, with the number of prints created for each species matching its wild population count. Proceeds benefit each animal or plant represented in a print. They started the Endangered Species Print Project as a way to directly support conservation efforts and biodiversity on Planet Earth. So far 19 other artists have joined the project. For information on the project: www.endangeredspeciesprintproject.com.