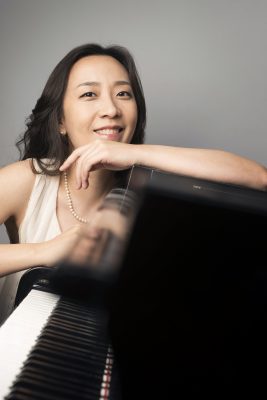 Pianist Jooyoung Kim, a native of South Korea, has been critically acclaimed on international stages for her dazzling technique, superb musicianship, and exquisite artistry. Since making her debut at the age of twelve as a soloist with the Korean Symphony Orchestra, Ms. Kim has presented numerous solo and chamber recitals in Korea, Japan, Germany, Spain, France, Portugal, Italy, Russia, and the United States. She has appeared as a soloist with many orchestras including the Korean Symphony

Jooyoung Kim graduated from Yewon Arts School, Seoul Arts High School, and Yonsei University in Seoul, Korea, from which she earned her Bachelor’s and Master’s degrees with top honors. Ms. Kim received Artist Diploma from the Universität der Künste in Berlin, Germany and then proceeded to earn a doctoral degree from Ball State University as a teaching assistant and a recipient of full scholarship. During her doctoral study, Ms. Kim was awarded the Graduate Student Recognition Award for every year and, by a vote of the faculty, the Outstanding Graduate Student for the 2008-2009 school year. Fittingly, she was awarded the ASPIRE Creative Art Grants in 2007 and 2009.

CONNECT WITH Arts Council of Indianapolis