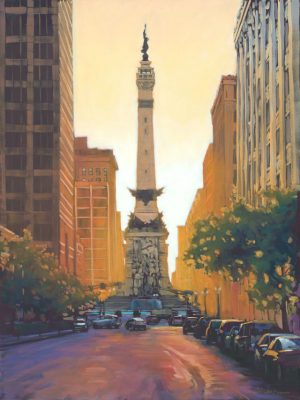 Jed Dorsey represents the fourth generation of artists on his mom’s side of the family and his dad is also a professional artist. Because of this, he always had the opportunity to practice art as a child. He even sold paintings as early as 11 years of age when his family had their “Dorsey Gallery” at the local fair. He remembers a few kind parents of his friends buying his paintings for $15 which quickly turned into cotton candy and a few rides. As he grew older other interests such as music and sports called for his time and he didn’t paint at all for several years.

That changed after Jed married his beautiful Canadian wife, Renae. On a trip to Whistler, B.C. in 2001, they they stumbled on some galleries that were showing some vibrant oil & acrylic paintings. His family had always done watercolors so this was something different and very appealing to him. That very week on their vacation, he bought his first acrylic paints and spent countless hours painting in this new medium. He loved it. Thus began the journey.

The reality was, however, that not every painting turned out for him. In fact very few in those early days did. This taught him some valuable lessons in perseverance. He also learned that failure is not the end. It can be the beginning of something new. He realized that he learned something every time he painted, whether or not the painting was a “success”. This has helped him think about how we need courage and perseverance in all of life, whether it is in art, our family life, exploring a new interest, starting a career, or going down a different path. It takes courage to start and perseverance to keep going.

Jed is thankful to have had the opportunity to study under some great artists like Mike Svob, Robert Genn, and Ovannes Berberian. He has learned so much from them. His parents continue to be a huge inspiration and encouragement to him. And Renae, his wife, walks on this path of artistic endeavor with him daily and is a constant source of friendship and support for him. Their daughter, Willow, also helps by coming up with names for his paintings and is an enthusiastic supporter of his work.