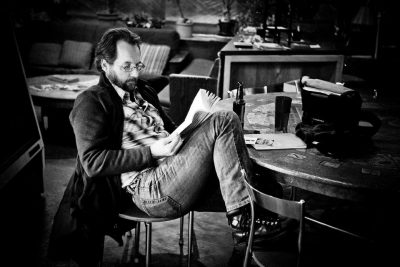 I’m a poet, spoken word performer, live sound effects/foley artist, and event producer. I am treasurer of the Writers Guild at Bloomington and executive director of the Spoken Word Stage at the 4th Street Arts Festival. I have been twice nominated for a Pushcart Prize and I have been a regular reader for the programs Books Unbound on WFHB community radio and Anthology on WFIU public radio. I’ve published five books of poetry — The Great American Scapegoat (2006), Little Glove in a Big Hand (2010), Hot Type Cold Read (2013), Homunculus (2019), and The History of Projectiles (2021) — and I have work in the anthologies Writers Resist: Hoosier Writers Unite (2017), And Know This Place: Poetry of Indiana (2011), and A Linen Weave of Bloomington Poets (2002). By day, I’m an ad hoc designer and composition coordinator at Indiana University Press.

As a sound effects/foley artist, I have taught, directed, and performed sound effects for the National Audio Theatre Festivals in Missouri since 2001, and I’ve performed and written for WFHB’s Firehouse Follies live variety show in Bloomington since 2008. In 1994, I made Hayward Sanitarium, a horror thriller audio series I directed and produced for NPR Playhouse. Since then I’ve taught at Indiana University, Michigan University, and Kansas City Art Institute, and have performed with the Knoxville Opera, Otherworld Media, Mind’s Ear Audio Productions, and many others, from studio work to costumed live theatre.

Over the years, I have produced or co-produced and collaborated on dozens of live performances and events in Bloomington, Indianapolis, and around the country, including Va-Va-Va Vaudeville!, WFHB Firehouse Follies live variety show, Krampus Night Bloomington, and The Encyclopedia Show-Indianapolis.

I also collaborate and play live sound effects with various musicians in the Urban Deer Record Co. collective in Bloomington.