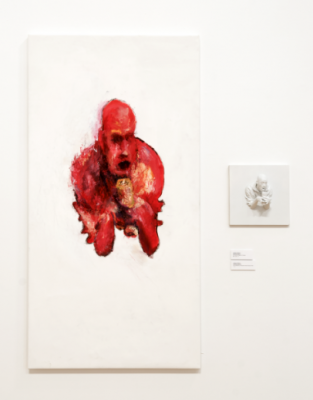 Johnson Simon, the Overachieving “Throw Away Kid”, was born with severe Cerebral Palsy. He couldn’t walk until he was 5 years old. He was born in the Turks and Caicos Islands then moved to Haiti to live with his grandparents while his parents went to the US to try to make a better life for their family. Haiti would not admit him into their schools, so he joined his parents in Florida. He was considered mentally retarded due his disabilities and was put into classes with others who were in that same category. He was never given the chance for an education like the “normal” kids, he was just thrown away.

He was lucky to have Michael as his mentor, father figure, and best friend who discovered that Johnson had the unique capability of being able to paint, even though his hands were deformed. This discovery led to Johnson going to the Alexander Dreyfoos School of the Arts in West Palm Beach, FL, in his senior year in High School being the only person ever admitted to the school in their senior year. That same year Michael passed away; Michael’s mother took over as the advocate for Johnson. After learning that he had a 70 IQ from his school records because he was never given extra time to take a test or an aid to help him write, she insisted that he graduate and not be held back for 2 more years, as the school proposed. She hired a tutor to improve his ACT scores and then a year later he was accepted into Western Michigan University in the Frostic School of Art. With lots of hard work and perseverance Johnson graduated with Honors. He was then accepted into IUPUI in the Herron School of Art for his Masters in Fine Art Degree, which he got in May 2018.

Johnson cares about others and wants to help other children succeed as he did.