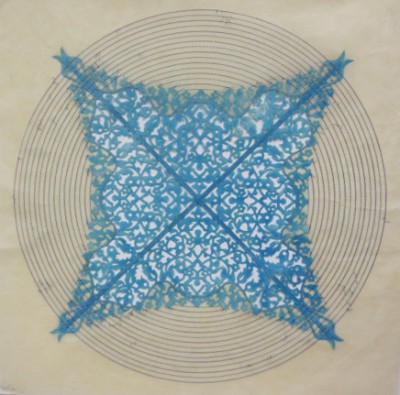 Agha works in a cross disciplinary fashion with mixed media; creating artwork that explores global politics, cultural multiplicity, mass media, and social and gender roles in our current cultural and global milieu. As a result her artwork is conceptually challenging, producing complicated weaves of thought, artistic action and social experience.

Biography: Anila Quayyum Agha was born in Lahore, Pakistan. She has an MFA in Fiber Arts from the University of North Texas. Agha’s work has been exhibited in over twelve solo shows and 40 group shows. In 2005, Agha was an Artist in Resident at the Center for Contemporary Craft, Houston. In 2008 she relocated to Indianapolis to teach Drawing at the Herron School of Art in Indianapolis. In 2009 Agha was the recipient of the Efroymson Arts Fellowship. She has also received an IAHI grant (2010) and a New Frontiers Research Grant (2012) from Indiana University. This year (2013) Agha received the Creative Renewal Fellowship awarded by the Indianapolis Arts Council.