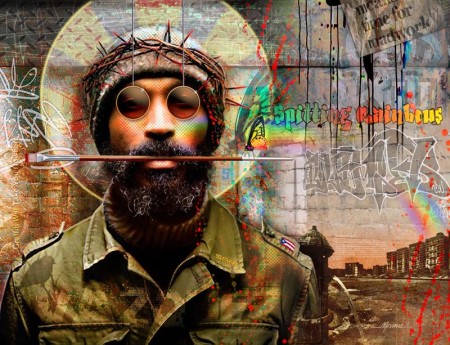 Born in Tortola, British Virgin Islands, and raised in St. Thomas, U.S. Virgin Islands, along with five siblings, Michael Evans is fundamentally a self-taught artist, with formal design training at The Art Institute of Indianapolis in Indiana. His art is sometimes known for blurring the line between fine art, illustration and graphic design. He essentially began his art career in high school rendering ink drawings onto fellow vocational classmates’ coveralls for a small fee. Shortly after high school, Michael learned the art of airbrushing and started a new trend on his native island painting illustrious graphics onto customized automobiles, a skill he had become defined by and performed for several years. His airbrush painting laid the foundation for a visual arts career. In 1989, a trip to Paris, where he visited the Louvre Museum, became a great source of inspiration and fueled his desire for fine art. He has since shown his work in numerous exhibits and arts festival and is currently producing and selling digital and traditional works out of his home studio and at the Harrison Center for the Arts in Indianapolis.