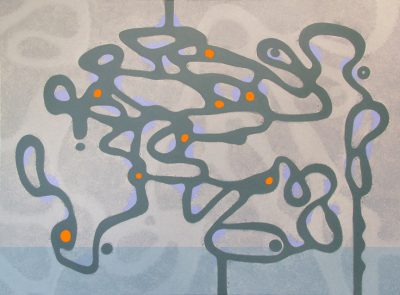 Keith J. Hampton got his start in commercial art in 1977 at the age of 18, working in publishing, first at The Saturday Evening Post company and later at ICP as the company’s magazine cover artist. By the time he reached the age of 25, he had already made his foray into marketing and advertising, working at mid-sized agencies in the Indianapolis market. A 2-year stint at Truevision, (a computer graphics and video card firm) gave him a firm base in digital media. in 1995, he started his own graphics and web design firm, it’sALLart.

Largely self-taught, Keith’s hand has always been in the fine art world, showing at the IMA consignment gallery and at several regional art fairs. His focus was crystalized further in 2001 with his first solo show of paintings at Eyeblink Gallery in Fountain Square. In 2003 he jumped in with both feet, opening his own Fountain Square gallery under the it’sALLart name. With two popular solo exhibitions showing that year, Keith’s fine art prowess became better known in the region and his sales began to increase. Finding the gallery biz in Indianapolis problematic, he began to show in regional galleries including Closson’s (Cincinnati), Gallery One 36 (Westfield), Woodburn and Westcott (indianapolis), Harrion Center for the Arts (Indianapolis), Sullivan Munce (Zionsville), Gallery 930 (Louisville) and in Carmel, Indiana’s Arts District for his “Feather & Brush” solo show. He has also shown his work in ArtSplash Gallery in Carmel and at other retail locations in the Indy area.

If eclecticism could be quantified by any type of meter, Hampton’s work would be off the charts, an attribute he embraces. His works span the range of many art types, including realism, surrealism, impressionism, cubism, abstract expressionism and in the last few years, sculpture. Hampton refuses to follow the widely-accepted academic norm of steady progression in one flavor and would rather, as he puts it, “speak many languages through my art and persue a multi-faceted approach.” In 2009, Hampton began working in 3d, producing sculptures for “Feather & Brush” in various materials, including wood, steel, plastic and fabric. In 2010 he created a lifesized “Yeti” sculpture which won first place at KIBI and sold one day later. In 2011, he created 20 realistic, mini-house sculptures in ceramic for his “House Works” show.