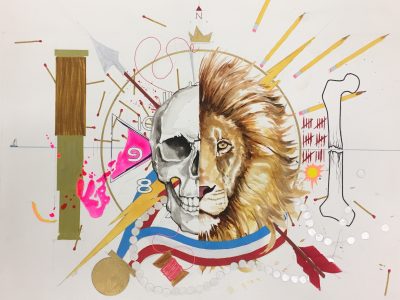 Lightning wielding, mixed media artist Kyle Krauskopf creates like other people breathe. He has spent most of his life in the pursuit of artistic endeavor.  Originally from a small town in Indiana this vagabond creative has taken his drive many places; most notably Seattle WA for the past 5 years as well as several European countries when he backpacked through them in 2017.  He recently retuned to his home state to construct a “base of operations” for the newly developed goal of displaying in as many places throughout the world as possible.  Equipped with a sense of wonder and knack for creativity since birth, Krauskopf has always been drawing and creating.  He holds a Bachelor of Fine Arts from Ball State University, where he learned what it was like to be around other creatives and was instilled with a drive to contribute something “new” to the world of art.  Never one to shy away from a challenge, Krauskopf has gotten into the habit of self-imposed, year long artistic goals.  The most notable of which was in 2015 when he decided to design and craft a new wooden animal each day of the year with his trusty scroll saw.  365 Days of Wood made the artist realize he places very little before commitment to his craft; that with dedication, persistence, and lots of hard work he could create impressive and wondrous works.  His work was recently featured in the national lifestyle magazine Vie, in tandem with an interview by editor Jordan Staggs. The work featured is of his Visual Vomit series. These pieces can best be described as heavily emotive pictorial menageries.  Each piece strives to marry realistic depiction of people, places, and things, with less detailed, but powerfully colored objects.  These pieces typically “radiate” from a centrally located theme or idea.  Repetition, color, size, detail, and shape all go into the process of achieving a visual balance.  Krauskopf also conceived of the Virago Artist Collective, an international artist collaboration striving to highlight powerful and influential women throughout history. The team consists of 13 artists and features a new personality and artist every month for the year of 2018, after which the whole body of work is to be shipped to each participants’ city for a showing of the collection. When Krauskopf isn’t having delusions of grandeur or conceiving of his next unrealistic challenge he can be found seeking out new and interesting conversation or enjoying a glass of gin.