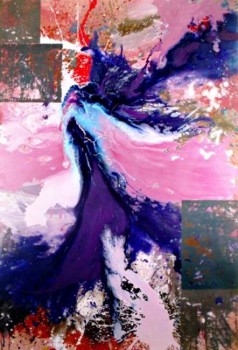 Quincy Owens is a full-time artist born and raised in Southeastern Indiana where the cornfields quite abruptly give away to rolling, forested hills. The pastoral grace and subtle beauty of this place have always inspired the artist to reflect upon his surroundings and how such a calm landscape hides a malicious past brought forth by massive glaciers that scoured through the hillside demolishing all in their path. In the studio Quincy intentionally crushes tempestuously through the early stages of each canvas as a reference to the beauty that may reside in destruction. In the end, each work illustrates this awkward beauty as aftermath of violence.

His best work exemplifies this beautiful destruction. Typically, hard-edged geometric patterns are used to subdue but never overcome the disarray that lies within each painting, within each of us. Instead, a marriage between chaos and order is carefully fashioned. These two polar opposites are brought together to coincide on one plane in harmony through the intentions of the artist.

Quincy decided he would pursue life as an artist while still a teenager. Gifted athletically he excelled at high school level sports, being offered scholarships from a number of universities, only to sustain a life-threatening injury. At this point he realized he was meant to be an artist.

Conceptually, his work has been viewed as an autobiographical maelstrom of design and color choice while also provoking a strong sense of catharsis with an exuberance not seen often enough in this age. His work is currently represented in New York, Ohio, Kentucky and Indiana. He has collectors throughout the United States.