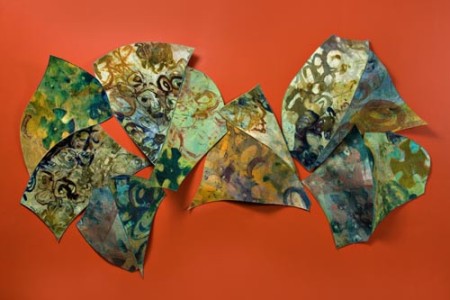 Much like a musical conversation, Stephanie Lewis Robertson sings to her hand-dyed and –printed fabrics while she works. Spirituality, ritual, nature, music, the concept of the “last worst time” and the current state of the world serve as the inspiration for the fabric and paper constructions.

Ms. Robertson is the Program Chair for Fine Arts at Ivy Tech Community College, Central Indiana region. She holds a MFA (1994, University of Georgia) and a BFA (1981, Miami University) in Fabric Design. Her work is included in several corporate and private collections and she is also a teaching artist with Arts for Learning of Indiana.
In 2017, she was accepted into Religion Spirituality and the Arts V. Among her other awards and grants are three Individual Artists Grants from the Indiana Arts Commission, an Arts in the Park grant (2017), Second Place Three Dimensional Work in Artistry in Fiber 2016 and Best of Show, Artistry in Fiber 2014, Second Place (2015) and First and Third Place (2011) in Surface Design at the Indiana State Fair, recipient of the Stutz Artists Association Studio Space in 2002, and an Arts Council of Indianapolis Creative Renewal Fellowship in 2001.

Some of her exhibitions include Invocations Tiny IV, V, and VI, Ivy Tech Community College Arts and Design Faculty Show, Wrestling with the Infinite, Be the Change, Indiana State Fair Juried Exhibition, Artistry In Fiber, Blue Indy, Make Your Mark , Inspired By Dreams, TBI Prayers, A Portrait of Womanhood and Th