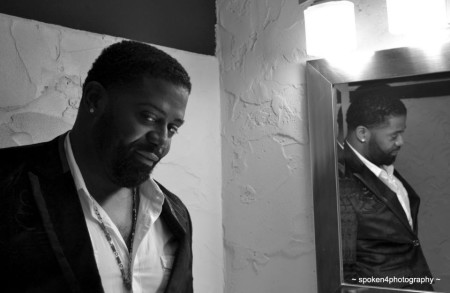 Deaon Smith is a native of Gary, IN, where at the age of 7 he started his musical career singing in the choir with the Church of God in Christ. Guided by his mother evangelist Lee Gerther Smith, Deaon attended Emerson Visual and Performing Arts High School, where he began training in classical and jazz both vocal and on piano. In 1992 he received further training in classical music while attending the University of Miami. In 1989 he formed his first group called ‘Message’ and won the Indianapolis Black Expo Star Quest Gospel Competition.

In 1993 in Chicago, he formed the R&B group called ‘Standing Room Only’ which opened for artists such as Gladys Knight, R.Kelly, Chaka Kahn, Baby Face and the Isley Brothers. Standing Room only then recorded their debut album titled “Du the Du” with Waterproof Music. Deaon has performed in Dreamgirls at the historic Madame Walker Theater where he received rave reviews. Deaon also performed in a variety of shows at The Indianapolis American Cabaret Theater.

Deaon is a solo recording artist that recently formed his own band called Deaon and “The Forever” Band for live entertainment performances. When Deaon performs live he is accompanied with “The Forever” Band, a keyboardist, percussionist, drummer, bass, and guitarist and background singers. Deaon vocal range is from 1st tenor to bass baritone and his genres of music is R&B soul, Jazz, Classical and Gospel. Deaon has amazing vocal versatility and a strong soulful sound; his live shows exhibit his very energetic performance and his remarkable talent. Deaon and “The Forever” band has played in numerous national clubs and events. Deaon and “The Forever” band have opened for artists such as The Ohio Players, Angela Winbush and Enchantment. Deaon is the winning champion of Daddy Real Entertainment 2011 Battle of the Band Competition and Daddy Real Entertainment  2012 “The Real Thing” Competition. Recently Deaon sung with Madonna in the 2012  XLVI Superbowl in Indianapolis, IN. Deaon currently debuted his official music video for his hot new single “Holding On” and is working on his first album titled “Forever” where he will give the music industry a taste of his amazing vocal skills. Deaon has been told by many that he has a “Luther Vandross” tone and the vocal swag of Dave Hollister. Deaon vocal performances have been described as “Food for your Soul”.