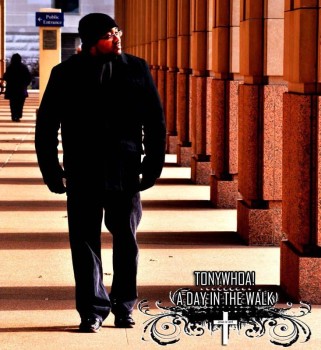 Tony “WHOA!” Wallace II is a Christian Rapper from Indianapolis, Indiana, who recently released his ninth CD, A Day in the Walk.

There needs to be many more music artists like TonyWHOA! and if they are out there then they need to be promoted. WHOA! makes and performs hip hop music: a genre currently filled with negative stereotypes of ungodly wickedness that has plagued/cursed individuals, families, communities, schools, people groups, cultures, work environments, cities, states and countries all over the world. WHOA! is not afraid to say what needs to be said in order to stop the plague…Even if it takes him denouncing hip hop to let you know who and what is more valuable and most important in life. This man is not only an rapper/MC(or whatever you call it). He is a brother, husband, father, a friend and a very hard working man. TonyWHOA! makes it clear as day that he is not about street status, money or popularity.

He fearlessly and boldly states the truth in his lyrics. He poetically delivers mature messages of substance, wisdom, encouragement, hope, love, peace, righteousness, consequences, grace, mercy and faith in his own creative/unorthodox way..yet with clarity. Pay close attention! You’ll want to listen again and again; just in case you missed something the other times around. Whenever, or however TonyWHOA!’s name is brought up, there is no question who TonyWHOA! stands for…JESUS!!!

“Trying to paint Tony as an average cat would be doing him disservice. As a matter of fact TonyWHOA! is a dude cut from a different cloth. He is a throwback MC in every sense of the word. Not only that, based on his socially conscience and at times humorous rhymes’ Tony might be considered a symbol of those who would like to take things back to “The Roots.” (Paul Collins, Dasouth.com)