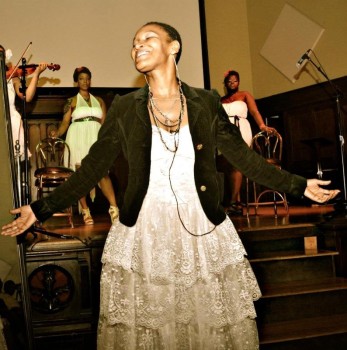 Born on the 23rd of January and having always felt like the stork missed that left turn at Albuquerque and dropped her off in Indianapolis, instead of New York City, where she’s been known to say her “soul was born” at, the artist formerly known as “nSAYchable” has changed her name to a befitting januarieYork. “It crosses the literary boundaries. I can write anything with this name and not feel embarrassed or wonder if people are interpreting it wrong. I’m not caged to the stage.” Like many others, januarie got her start at writing early on and began writing poetry regularly in the 11th grade. She performed her first poem at her grandfather’s funeral at the age of 22, of which she was told she should attend a local poetry reading and perform more often. From then on, she was hooked. After taking to the stage for the first time at a poetry setting in 2004, then-nSAYchable went on to become one of the top spoken word artists in her city. She was signed to a local label designed for poets and went on to record her first EP, Say Something and began performing her descriptive poetry everywhere from open mics to various colleges.