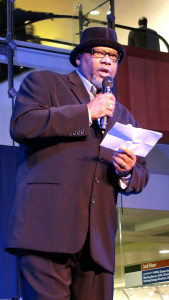 Mixed-media artist, independent curator and art instructor Anthony “Tony” Radford, was first inspired through his desire to share his own art as well as the work of a multitude of talented African-American artists living, working and creating in the Indianapolis community, an environment where relatively few Black artists work were/are viewed by the public-at-large.

A 2000 NUVO Cultural Vision Awards winner, the arts activist has had an exceptional history of commitment to area artists, and in bringing the arts to Indiana.   The native son has been called the “Ambassador of African-American Art in Indianapolis” by many, having come up with the concept and implementation of the original Indianapolis Marion County Public Libraries (IMCPL) now entitled the Indianapolis Public Libraries (INDYPL), annual art exhibition and gala celebration reception entitled “Meet The Artists’,” over twenty-eight years ago.   Radford, was one of the key co-founders of the only nationally recognized, largest membership, longest participating Indiana, African-American arts association “INDY Renaissance,” now defunct.   He was also founder of the popular arts consortium “I AM” Artists’ Group, and is host of the popular annual late-summer, inner-city arts & cultural festival celebration “Art In The Garden.”

Radford’s life as an artist, activist and independent curator of the 28 year run of the Meet The Artists’ annual art exhibition and gala was recently documented and showcased in the 1st of a kind book (in Indiana), featuring African American visual artists entitled, “HORIZON: Contemporary Indiana Artists’ Of Color” by interdisciplinary artist/author D.  Del Reverda-Jennings, a fellow colleague and BAIA member.

The artist, a member of the local advisory committee of the Indianapolis Art Center (IAC), is a former artist mentor and art instructor for the IAC’s ArtReach Program (a youth art program which originated in the early 90’s by noted local African-American artist John Andrew Spaulding).   Radford is a longtime art instructor for Young Audiences of Indiana, has worked intensively as an art facilitator with the Indianapolis, Westside’s Clifton Street area neighborhood youth and facilitates art workshops for the Indianapolis Marion County Public Library (IMCPL), which has been renamed the (Indianapolis Public Library (INDYPL).

Anthony “Tony” Radford, is known throughout Indiana for his signature mixed-media artworks and “Pop-Can Art” crafts, although his preferred area of practice is of a serious context with a diachronic message within his eye opening, opinionated, collaged statement pieces.  Much of this work is based on social, political commentary and leans toward past racial injustices which represent revolt against traditional doctrine and unmasks the desire to overlook or to forget yesteryears issues of hatred and bigotry.