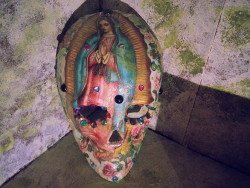 My artist name is Copper. I chose this name only because I was using it as an 'alias' when I was hosting goth parties in the 90s. That is when I started drawing and painting. I signed those works Copper and so I have kept it even though it confuses people. I am also a DJ and go by the name Copper Top, which is another story for another day.

I am not a trained artist. My degree was in political science and history. I never even considered art until one day I decided in the 1990s I decided to draw a picture and showed it to my boyfriend. He said to 'give it up'. I hate those words so I kept going anyway. I continued drawing and eventually I moved into collage and painting. By the late 90s I was producing works which incorporated many styles and mediums. I had several small shows in the city in the early 2000's including The Bungalow in Broad Ripple and many coffee shops in the city.

In 2002 I decided to leave behind my art to pursuing DJing as my main creative outlet. I decided that someday, when I didn't want to DJ as much, I would come back to my art.  I DJ'd all over the country and the world between 2002 and 2012. I released 6 licensed CDs which were distributed globally. All of this was done on small Indie labels here and in Germany. When I spin now from time to time I play a mix of industrial, psy trance, dark house, and techno.

In January 2012 I began to become serious about art again. I brought to it a new confidence in making my own rules. I was also deeply affected by 'The Occupy Movement'.  I was an activist in my college days and worked on many humanitarian causes. I studied political economics and have always leaned to the left, although my current convictions have evolved since those days. I began to marry my concern for global political and environmental crises to my expression through art. I recently published a piece of prose in the Canadian art publication 'Adbusters' and strongly support everything that periodical hopes to accomplish for a better global future.

I also very much enjoy creating 'decorative art'. I do this to distract from my gloomy side. I love vintage kitsch and moreover mxing it with other surreal 'childish' decorative objects. I love making diorama. I love spanish and latino style art and am strongly influenced by it. I also enjoy completely remaking large objects like furniture. I have dabbled in  painting, drawing, photography, collage, assemblage, sculpture. I hate making anything more than once. I constantly am looking for some new idea to bring to my art.