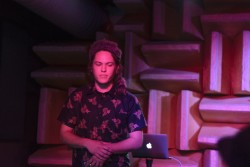 Nicholas Smith is a mixed-media artist born and raised in Indianapolis, IN. He is a graduate of the Visual Arts and Humanities magnets at Broad Ripple High School, as well as a graduate of Butler University with a major in Recording Industry Studies and a minor in Art + Design. Nick’s current body of work consists mostly of abstract paintings, drawings, and mixed media pieces which are often based around a stream of conscious process.

Nicholas has collaborated on murals at various places around Indianapolis, including Einstein Bros. Bagels in Broad Ripple, as well as the Peace Learning Center in Eagle Creek State Park.

Nick is also a producer and DJ, working under the pseudonym “Mandog”, and can be found performing or recording with various artists in the greater Indianapolis area.