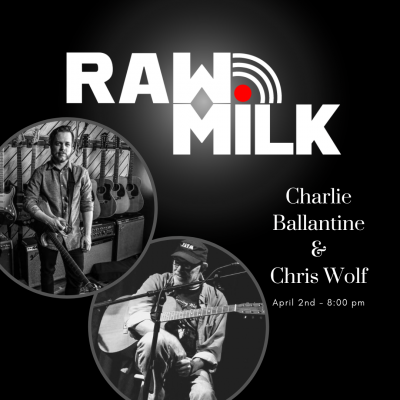 RAW MILK can be watched on:

RAW MILK is a series of performances streamed LIVE from Indianapolis, IN based recording studio, Milkman Recording Studios and produced in conjunction with J Saltsman Photography (jsaltsmanphoto.com). RAW MILK facilitates a safe, immersive music listening experience by bringing performers and the studio to your living room.

“In the vein of fellow guitarists like John Scofield, Bill Frisell and Julian Lage, Ballantine reconciles his educational background in jazz with the stylistic background of his instrument. He approaches the gratifying tonal and harmonic language of rock/roots with the groove, ambition and improvisational focus of a jazz musician. The title track, a baroque march, illustrates Ballantine’s gift for crafting lyrical, dynamic compositions from a familiar color palette. “Zani” and “Moon City,” tuneful slow grooves wet with nostalgia, also focus on phrasing and harmonic rhythm rather than the complexity of individual harmonies. The guitarist’s solos, both patient and cavalier, capitalize on the earnest warmth within progressions that are more inviting than they are demanding.

In line with his fusion tendencies, Ballantine also subverts the devout modesty of jazz guitar’s default tone (blunt warmth). His Telecaster’s sharp attack trails rich waves of reverb and delay. When paired with Ballantine’s feel-oriented approach to phrasing, this creates the paradoxical effect of being both expansive and intimate — an oceanic lushness that conjures depth without obscuring the nuances of the guitarist’s touch.” – Asher Wolf (Jazziz Magazine)

“There has been no shortage of solo talent in this year’s contest. Some have made their mark with a distinct voice. Some have done it with a “jaw-dropping guitar solo” (‘eat your heart out, Eddie Van Halen’). Some did it with memorable hooks. Others with a sense of humor. Then there’s Chris Wolf, an artist who has done it with all four of the above listed criteria, and then some. When I last saw this guy, he amazed and left the entire building in stitches with his songs about invisible dogs, critters, and a crossroads to nowhere. This time around? It’s no different. Though later admitting he was nervous before taking the stage, he looked nothing like it underneath the blazing hot lights of an already toasty building. Sure he may not have a fancy effects board, a backing band or a drum machine, but who needs it? What Chris lacks in fancy toys, he makes up for in sheer, raw talent. Besides, you don’t need all of those anyway to get a room full of people clappin”

“Chris Wolf style of music is not only unique, but he makes it extremely fun. A natural story teller, who knows how to pick a guitar…the Jim Stafford or Ray Stevens of Indianapolis? Eh, possibly on this album, The Wolfman. Backed up by some of Indy’s top musicians…The Wolfman is a very fun CD.” – Brother Brother Beercast