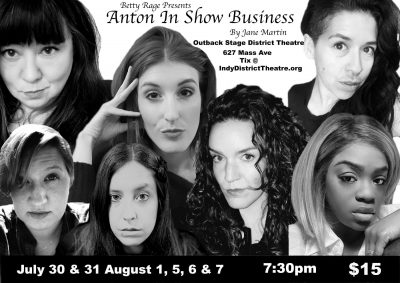 Join us for the all-female production of “Anton in Show Business,” a previous winner of the Harold and Mimi Steinberg/American Theatre Critics Association New Play Award.

This madcap comedy follows three actresses across the footlights, down the rabbit hole, and into a strangely familiar Wonderland that looks a lot like American theatre. These women pursue their dream of performing Chekhov…in Texas. In the tradition of great backstage comedies, “Anton in Show Business” conveys the joys, pains, and absurdities of putting on a play.

“A smart, acerbic crowd pleaser […] Simultaneously a love letter and a poison pen letter to the American theatre.” — Variety

“Consciously an example of the problem it addresses, often with aching hilarity, that the world of theatre is growing ever more estranged from the straightforward business of telling stories.” — The New York Times

Outback Stage at The District Theatre