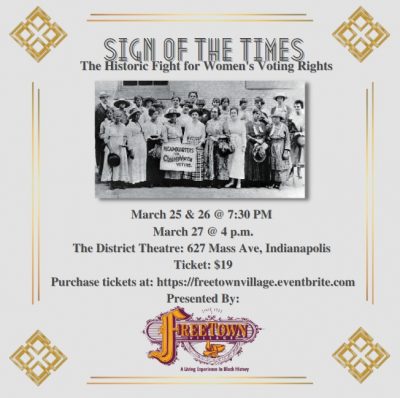 Sign of the Times - The Historic Fight for Women's Voting Rights

Presented by Freetown Village at The District Theatre

The play, presented by Freetown Village, highlights women’s fight for voting rights and the passage of the 19th amendment of the U.S. Constitution.

Beginning in the mid 19th century, the Women’s Suffrage Movement battled for women to gain their rights at the ballot box. Victory came through with the ratification of the 19th Amendment of the United States Constitution in August of 1920.

On November 2, 1920, Gwendolyn Harris – a school teacher – would vote for the first time, as the third generation of women in her family who fought for this very moment. Hear Gwendolyn’s journey on getting to the historic day when all women were given the right to vote and the joy it brought her to cast her ballot.

Celebrate Women’s History Month with us and the passing of the 19th Amendment with this one-woman play.