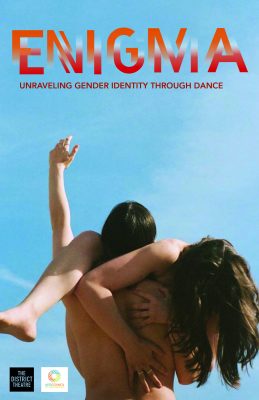 ENIGMA is a dance space for LGBTQ+ identifying choreographers in the Indianapolis community to present their work, express themselves, and explore the role of gender in dance.

Presenting 10 LGBTQ+ choreographers from the Indianapolis community, ENIGMA is a contemporary dance performance focused on exploring gender roles in dance.

Our world often aims to divide people into binary roles based on their presenting gender. The dance industry is no different. ENIGMA aims to break this archaic mold, and showcase the diversity in non-traditional gender roles as well as gender neutral roles. The choreographers all participated in open dialogue with both their cast and one another during the creative processes to create authentic works based on substance over gender.

Help support the queer arts community, challenge your ideas of gender stereotypes, and enjoy an evening of artfully crafted choreographic works.   There will be a Q & A following the August 6th performance.

ENIGMA is made possible by the Robert D. Beckmann, Jr. Emerging Artist Fellowship of the Arts Council of Indianapolis, presented to Natalie Clevenger.

August 6th there will be a post-performance discussion/Q & A.

Metered parking is available on Mass Ave. The Penrose Garage is available for an hourly rate and Zion Evangelical Church has surface parking at the corner of North & New Jersey, just a short walk to the theatre.