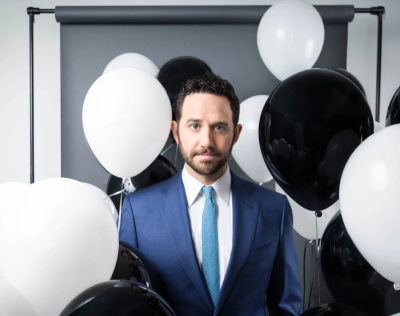 “Santino Fontana [is] one of the most promising young actors to emerge in the New York theater in recent years.” – New York Times Santino Fontana has cemented himself as one of Broadway’s foremost leading men as well as a formidable screen talent. In 2019, Santino won the Tony Award, for his virtuosic performance as Michael Dorsey/Dorothy Michaels in Tootsie.

He was nominated for a Tony Award for his literally charming performance as Prince Topher in Rodgers + Hammerstein’s Cinderella and is widely known for lending his voice to the villainous Prince Hans in Disney’s Academy Award-winning animated hit, Frozen. His other Broadway credits include his roles in the Tony-winning mega-hit Hello Dolly! opposite Bernadette Peters, as Moss Hart in the Tony-nominated Act One opposite Tony Shalhoub, The Importance of Being Earnest, A View from the Bridge, Brighton Beach Memoirs, Billy Elliot, Sunday in the Park with George, and Sons of the Prophet. Santino has also performed in venues such as Lincoln Center’s Appel Room, Birdland, Carnegie Hall, the Kennedy Center for the Performing Arts, and more.

On television, he starred in CW’s comedy Crazy Ex-Girlfriend opposite Rachel Bloom and NBC’s drama series Shades of Blue opposite Jennifer Lopez simultaneously. He can also be seen in the critically acclaimed current season of The Marvelous Mrs. Maisel and Sisters opposite Tina Fey & Amy Poehler.