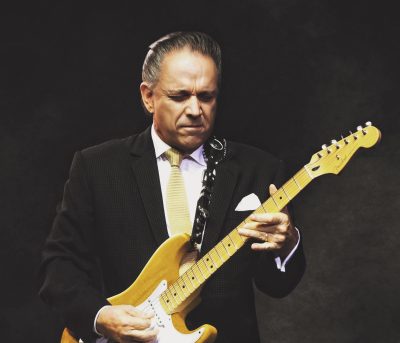 Don’t miss this intimate performance with blues guitarist Jimmie Vaughan at the Tarkington.

From chart-topping success with the Fabulous Thunderbirds to Grammy-winning collaborations with his late brother Stevie Ray and now a thriving solo career, guitarist Jimmie Vaughan has been a leading voice of Texas blues on the national landscape. His 2019 album, Baby, Please Come Home, earned him another Grammy nomination and a Blues Foundation Award for Best Male Artist. Last year, he released The Jimmie Vaughan Story, a limited-edition box set and book with more than 200 photos covering his life and career. Don’t miss this intimate performance at the Tarkington.

Opening the show with a solo acoustic set will be Indianapolis-based singer-songwriter John Boyle, known for his smoky vocals and intricate guitar work. Influenced by Americana, ’60s blues-rock and the acoustic singer-songwriter tradition, he tours nationally and has released two albums: Early Lights in 2018 and Prelude in 2020. More information is available at www.johnboylemusic.com.

The Tarkington at the Center for the Performing Arts