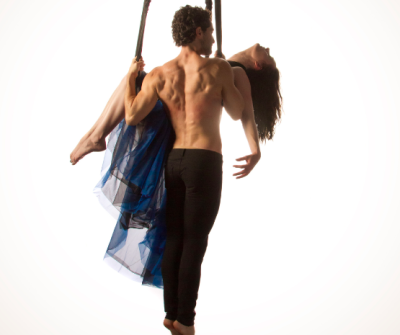 The concept of Love Is… is the original creation of DConstruction Arts that through movement (aerial and dance), video projection and sound design explores the various ways that people define and experience love.

The concept of Love Is… is the original creation of DConstruction Arts that through movement (aerial and dance), video projection and sound design explores the various ways that people define and experience love.

Love Is… Iteration #101 is a two person experimental aerial, dance and theatrical performance that examines love from the perspective of artists. Tavi Stutz and Jane Rose McKeever interpret postmodern choreography on five different traditional and non-traditional aerial apparatus to a soundscape of artist voices gathered from 2016 to present. The juxtaposition of movement, voice and projected video – featuring performers from around the world – weaves together an experience that invites the audience to discover for themselves how the elements support each other. Throughout the evening, Stutz and Rose McKeever continually break the 4th wall, appearing on stage as the audience enters, inviting the audience to contribute a definition of love that will later be read as a part of the evening, and directly addressing the audience through monologue and movement. Stutz and Rose McKeever ground their work through their own personal experiences. That mixed up with the tapestry of artists’ voices and video allow the audience to contemplate how they support each other and even discover themselves and their ideals in the various expressions of love.

DConstruction Arts was founded in 2014 by Tavi Stutz and Jane Rose McKeever. Prior to and in addition to his work with DConstruction Art, Tavi Stutz has performed with the Bolshoi Ballet in Moscow, Cirque du Soleil, Cirque Berzerk and Circus Vargas. In addition to this he has directed and choreographed productions in and
around the greater Los Angeles area including the Loft Ensemble Theater and Sacred Fools. Jane Rose McKeever has worked in audio and visual design for theater, film and television, including work with Walt Disney Imagineering and the HBO show The Nevers. She is also a tenured professor and the Head of Production in the Department of Television, Film and Media Studies at California State University, Los Angeles.

Drawing upon their individual professional backgrounds, Stutz and Rose McKeever have conceptualized and produced many multimedia infused productions; including the multiple award winning two-person show Definition of Man (Ovation nominated for Best Stunt Choreography, LA Fringe winner for Best in Dance/Choreography), collaboration on Dreya Weber’s one-woman show Witch Piece/Hexen, and many different productions of Love Is… between 2016 and 2022, most recently completing a collaboration with Donald Byrd and Spectrum Dance Theater in Seattle WA.