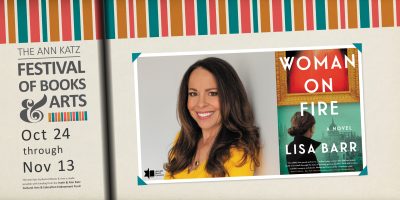 Virtual interview with Lisa Barr, author of ‘Woman on Fire.’

From the author of the award-winning Fugitive Colors and The Unbreakables, New York Times bestseller and upcoming Sharon Stone film Woman on Fire is a gripping tale of a young, ambitious journalist embroiled in an international art scandal centered around a Nazi-looted masterpiece—forcing the ultimate showdown between passion and possession, lovers and liars, history and truth.

Rising young journalist Jules Roth is given an unusual assignment: locate a painting stolen by the Nazis more than 75 years ago. A world-renowned shoe designer wants this portrait of a beautiful, mysterious woman for deeply personal reasons, but Jules doesn’t have much time; the famous designer is dying. Meanwhile, in Europe, provocative and powerful Margaux de Laurent also searches for the painting. Heir to her art collector family’s millions, Margaux is a cunning gallerist who gets everything she wants. The only thing standing in her way is Jules.

This is a Jewish Book Council program. Barr will be interviewed by writer Carol Weiss.