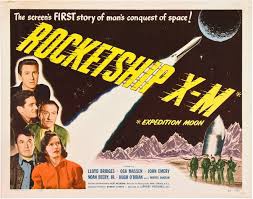 Film historian and preservationist Eric Grayson presents a three month series of science fiction classics. For July, the second film in the series, we feature the 1950 black-and-white film, “Rocketship X-M”, the first outer space adventure film of the post-World War II era. Produced and directed by Kurt Neumann, it is the story of five astronauts on their way to the Moon when they are propelled by gravitational forces and end up on Mars instead.