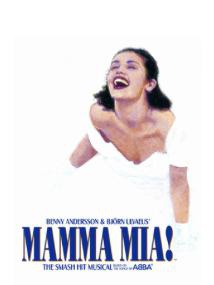 Set around the all-out disco hits of colorful Swedes Abba, Mamma Mia is the story of love and friendship, past, present and future and dancing!

Mamma Mia was the brainchild of British producer Judy Cramer and playwright Catherine Johnson, who was motivated to create the Abba based spectacular after meeting two members Benny and Bjorn when working with Tim Rice. Seeing the theatrical potential apparent in the superstar band's hits, Mamma Mia was born, and since its 1999 debut, has gone on to spawn worldwide productions, been seen by 54 million people and inspired the global record breaking movie starring Meryl Streep, and Pierce Brosnon.

Including hits as "Super Trouper", "Lay All Your Love On Me", "Dancing Queen", and many more!