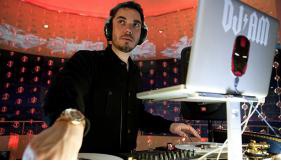 Heartland Film Festival: As I Am: The Life and Tim...

DOCUMENTARY FEATURE / OFFICIAL SELECTION 105 MINUTES / USA / 2015 Director: Kevin Kerslake Producers: Dan Franklin, Joel Marcus, Robert Bruce Executive Producer: Andrea Gross Featured Subjects: Adam Michael Goldstein, Travis Barker, Jeffrey Allen Townes, Mark Ronson, Steve Aoki, Jon Favreau A mash-up pioneer with a tragic beginning and end gets his due. No matter where you go, there you are. That’s the central theme of As I AM: The Life and Times of DJ AM, a documentary on Adam Goldstein, who battled addictions, obesity, and depression before becoming one of the first rockstar DJs and then succumbing to a drug overdose in 2009 at age 36. This film contains strong language, strong drug content, sexual content and some nudity.