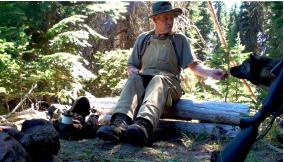 Presented by Heartland Film at Unknown

DOCUMENTARY FEATURE / OFFICIAL SELECTION 82 MINUTES / USA / 2014 Director: David Manougian Producers: Troy Gambee, David Kamens Executive Producer: David Manougian Featured Subject: Michael Nelms Courage takes on many different faces. Sometimes courage comes in the form of heroic feats, other times it can take enormous courage to pick up the pieces of a broken life and just put one foot in front of the other. Michael’s story is that of a man whose life spiraled downward leaving him homeless and penniless. Rather than live under a bridge, Michael and his dog, Tic, moved into the middle of the harsh and unforgiving Oregon Wilderness and built a secret cabin on government land. In this stunning, self-shot account of Michael’s seventh year of isolation in the wilderness, you are immersed in his world. Feel hungry as he fights starvation, shiver when he’s cold, cry when he relives a life gone wrong and celebrate with him the simplest of life’s beauties. The Big Lonely will transport you into a world of survival, loneliness, redemption and courage. This film contains some graphic footage involving the butchering of animals and mature themes.