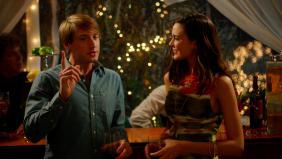 NARRATIVE FEATURE / OFFICIAL SELECTION 94 MINUTES / USA / 2014 Director: Phil Allocco Writer: Phil Allocco Producers: Steve Carr, Jason Taragan, Isen Robbins, Aimee Schoof, Phil Allocco, Kim Jackson, Colleen Camp, Tim Degraye Executive Producers: Janice Fidler, Blondel Aidoo, Deborah Maguire Cast: Fran Kranz, Odette Annable, Chris Diamantopolous, Mary Elizabeth Ellis, Miles Fisher Gilby Smalls is having a meltdown. He’s just been fired from his job, lost his apartment in a fire and his girlfriend gave him the boot. And it’s only Wednesday. Now, at the ripe old age of thirty-something, he is forced to move in with May, his boozeswindling man-obsessed mother. This is the last straw. Gilby’s life is bleak until best friend Kevin drags him to a family get-together, where he meets Rachel, Kevin’s very beautiful but very married sister. Rachel is the very thing Gilby needs to get his life back on track. Desperate to impress her, Gilby starts to weave a web of lies; one bigger than the next. Now in a sticky mess, Gilby is forced to face the uncomfortable truth about himself before he can find a way out of his very own lies. This film contains some strong language and some sexual content.