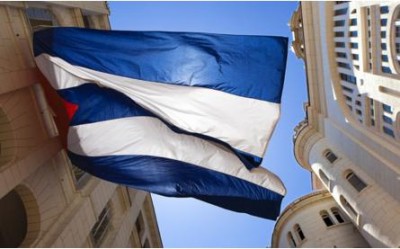 Presented by Indianapolis Contemporary at iMOCA at The Murphy

Transaction Boundaries features the work of artists Elena Lavellés, Artur Silva and Elizabeth Webb. The artists’ collaborative installation of video, photographs, objects and text examines how religious and economic systems in Cuba have impacted the nation’s culture both historically and presently. Using Santeria (a religion born from the blending of West African traditions and Catholicism) as a reference, the artists look at how this and other forms of syncretism have been and can be used to subvert power relations and ensure cultural survival.

The recent reopening of U.S. diplomatic relations with Cuba in August 2015 provides an interesting framework for the project.

From Madrid, Lavellés is a visual artist with an MFA from the California Institute of the Arts (CalArts). She has shown work in Singapore, Argentina, Spain, Mexico and the U.S. She has received several grants, fellowships and residency awards in Mexico, Spain and Singapore.

Artur Silva was born in Brazil and lived for some time in Indianapolis, where he was awarded a Creative Renewal Arts Fellowship in 2013-2014. He has shown work at the University of Chicago Smart Museum, the Indianapolis Museum of Art and the Van Abbe Museum in the Netherlands. He is currently completing his MFA at CalArts.

Elizabeth Webb is an artist and filmmaker who is currently completing a dual MFA in Film and Photography at CalArts. Her work explores issues surrounding race and identity using her family history of migration and racial passing to explore larger, systemic constructs. She has exhibited in the U.S., Canada, Japan, Singapore, and Germany and was a recipient of the inaugural Allan Sekula Social Documentary Award in 2014.

iMOCA at The Murphy