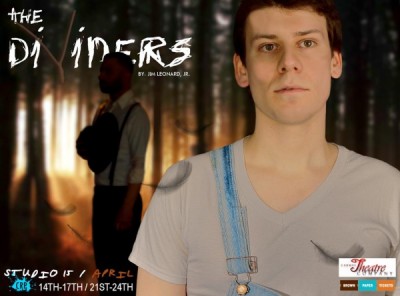 Presented by CASEY ROSS PRODUCTIONS at The Carmel Theatre Company

Set in the early days of the Depression in a small, fictional Southern Indiana town named Zion, The Diviners follows the story of Buddy Layman, a mentally-challenged boy and prophet of sorts with the rare gift to divine water. When a stranger named C.C. Showers passes through Zion, looking for work and food, Buddy takes a sudden and immediate interest in the passer by, which draws the town’s attention to C.C., rapidly. The two become close friends and C.C. soon finds himself as Buddy’s mentor. Jennie Mae, Buddy’s older sister quickly finds herself attracted to C.C., and though he likes her too, they are separated by a conservative 1940s Indiana town. Soon, as quick as the flow of the river, gossip, suspicions and ambitious blind faith change C.C.’s relationship with Buddy and the people of Zion–leading to a horrible tragedy, all weaving together this thought provoking and poignant play that questions the very nature of faith. CRP will present Jim Leonard, Jr.’s classic Indiana play this April, with a captivating blend of story-telling and folk music in the intimate Studio 15 theatre in Carmel’s charming Arts District.

CRP is proud to be celebrating the Bicentennial of our great state with this colorful production of The Diviners. The Diviners was written by Indiana playwright Jim Leonard, Jr. at his alma mater, Hanover College. Casey Ross, company Artistic Director and director of The Diviners, shares alumni-status to Hanover College with Mr. Leonard and had the privilege to meet not only Mr. Leonard, but also was taught by original cast members and the original director, the noted director and acting coach, ‘Doc’ Tom Evans. Mr. Leonard and Tom ‘Doc’ Evans even collaborated funding to bring Ross back to campus after graduation as a guest artist in 2008 when the college produced one of Ross’s original scripts. “I got my start with professional theatre when I was cast in The Diviners in High School. Being a smaller cast, it was a production that only the serious theatre students were chosen for. I remember falling madly in love with the script after my first read and made it a goal of mine to attend the school this show was written at—for months auditing for The Diviners was all I talked about. I hold great revere for this script and for Jim Leronard’s work as a playwright; I think his work honors not only our season mission statement to celebrate the beauty ‘ordinary’ people but also Indiana. The play is a classic and it’s local.” Says Ross. It’s because of The Diviners’ deep Indiana roots, CRP could not think of a better play to celebrate our second season and also Indiana’s 200th year.