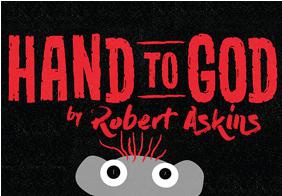 Winner of the 2014 Off Broadway Alliance Award for Best New Play and a critical hit on Broadway, this Tony Award nominee follows shy student Jason as he discovers an outlet for his burgeoning creativity at the Christian Puppet Ministry…until his hand puppet Tyrone – once soft-spoken – takes on a shockingly irreverent and dangerous personality all its own. As Tyrone’s influence over Jason grows, Hand to God explores the startlingly fragile nature of faith, morality, and the ties that bind us.

“Nothing is more exciting than a new play that takes you by surprise,” and, according to the Wall Street Journal, Hand to God is one such production, both “staggeringly funny and promising without limit.” The New York Times declares it to be a “darkly delightful play…a festival of filthy hilarity,” in which can be discovered “a weird mirror of our unsettling times.” The show was nominated for five 2015 Tony Awards, including Best New Play, and has been declared by Time Out to be “the freshest and funniest Broadway comedy in years.”