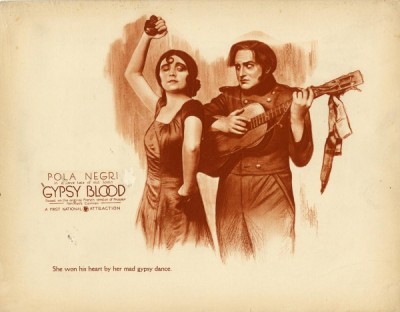 Join film historian and preservationist Eric Grayson as he presents a new series of unique and rare vintage film titles. Tickets are available at the door on the night of the film. Popcorn, candy and drinks are available for sale.

The story of Carmen told without opera. Carmen (Negri), a gypsy girl who works in a cigarette factory, enchants soldier Don Jose (Liedtke). Of course, the romance is doomed. Fascinating early film directed my Ernst Lubitsch, and starring Pola Negri, who became more famous for fainting at Rudolph Valentino’s funeral than for her acting skills. Negri was a gifted actress, and Gypsy Blood is our earliest surviving opportunity to see her talent develop.  Live score by pianist Roger Lippincott.