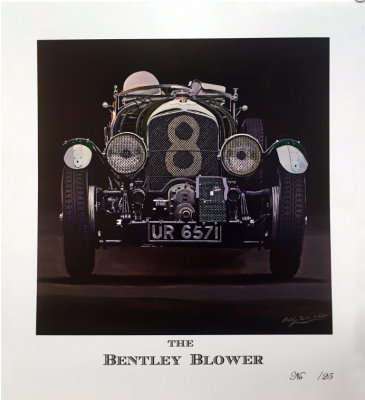 The imposing “Blower” Bentley is the iconic Bentley racer of the pre-war years, forever linked with the image of its driver, Sir Henry (Tim) Birkin. Though founder W.O. Bentley opposed its development, the 4 1/2 Litre Supercharged drove like a rocket, earning Bentley a legion of fans at every race it entered.

Phillip is an artist and designer with over 40 years experience within his chosen profession. His work has taken him over 6 million miles, to all five continents and to virtually every major city in the world.

Born in Birmingham, England and educated in Great Britain and Europe he has undertaken design and art projects for both the private and corporate sector worldwide. Including some of the top Fortune 500 companies and some of the world’s wealthiest people.

His art is all about “excellence” and capturing the skills, talent, mastery, passion and the very soul of his subjects on canvass or paper. People and machines, throughout history, that have achieved and pushed the boundaries, in their chosen professions. Be it Racing Drivers and their machines, Michelin star chefs or Sportsmen whom have become “icons and legends” in their lifetime and gone on to inspire others to do the same.

Now living in Marbella, Andalusia Spain, he is still travelling to Asia, the Middle East and America where he is working on various luxury projects, lecturing and exhibiting his art.