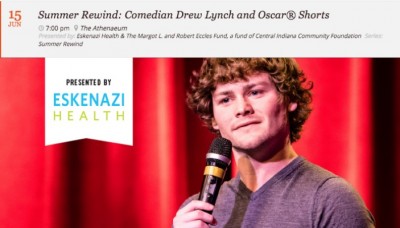 About Drew Lynch: Originally from Indianapolis, at the age of 19, Drew Lynch moved to Los Angeles with aspirations of becoming an actor, then an unexpected softball accident just a year into his acting career left him with a severe stutter and crushed his hopes of ever performing again. But his continued drive to become an entertainer forced him in a different direction, he started reflecting through stand-up comedy on the “softball that humbly changed his life.” Drew’s ability to deal with his stutter and making it relatable to real-life situations ultimately landed him the title of first runner-up on “Season 10 of America’s Got Talent.” Inspired by comedians Bo Burnham, Louis C.K, he now headlines Comedy Clubs across the country. In addition, Drew has appeared on the “Dr. Oz Show,” and as a celebrity guest on the game show “Idiot Test.”

About Stutterer: Stutterer tells the story of a lonely typographer with a cruel speech impediment but an eloquent inner voice who must face his greatest fear. Not only was the film an Official Selection at the 2015 Heartland Film Festival, but Writer/Director Benjamin Cleary took home Oscar® gold this year for Best Short Film in the Live Action category.