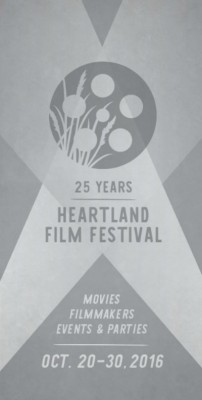 Presented by Heartland Film at Unknown

Indiana’s largest and longest-running film festival will celebrate its 25th anniversary this October across Indianapolis! Since the inaugural Festival in 1992, Heartland has grown from a 3-day event with less than 20 films to an 11-day celebration featuring more than 130 independent films, 120 visiting filmmakers and 250 film screenings.

Founder and President Emeritus Jeff Sparks was part of an visionary team that wanted to highlight movies that could make a positive impact on audiences – movies and stories that showcased the best of the human spirit – and that mission is still alive today. Heartland has built a reputation on its impactful movies, the connections audiences make with visiting filmmakers, the overall hospitality and intimacy of the experience, and bringing big Hollywood names – like Robert Downey Jr. and Oscar winner Geoffrey Rush – to the Hoosier state.

The Heartland Film Festival has earned the special designation of being a qualifying festival for the Annual Academy Awards® within the Short Films category. This means that the winner of the Grand Prize for Best Narrative Short Film will qualify for consideration in the Short Films category of the Annual Academy Awards® without the standard theatrical run, provided the film otherwise complies with the Academy rules. Since the first Festival in 1992, Heartland Film has awarded more than $3 million in cash prizes – the largest prize amount given to independent filmmakers by a festival in North America, and quite possibly the entire world.