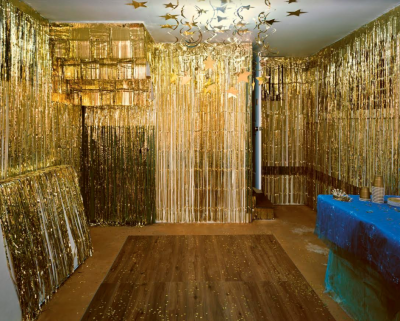 iMOCA will open Psychological Traces, an exhibition of Sarah Hobbs’ artwork, at the iMOCA City-Way Gallery on January 8. It will be exhibited until June 24, 2017. Sarah is known for her work in which she states that she “examine(s) concepts that involve the human psyche: neuroses and compulsions that challenge us all, questioning the idea of normal and illustrating our attempts to cope with and manage our issues.”

Hobbs creates installations in living spaces such “Alarmist (Motel 6)” that features a tent and objects hoarded by a survivalist; or, the room with walls clad in gold metallic sheets that features the iconic refreshment tables found at high school proms in “Prom Forever.” Hobbs then photographs these displays and presents them in human-scale color photographs.

Hobbs grew up in Columbus, GA. She has received several awards and honors including the Walker Evans Focus Fellowship, and an AIR Serenbe and an Artadia Grant. She was among the Photolucida Critical Mass Top 50 in 2011 and a finalist for the Forward Arts Foundation Emerging Artist Award.