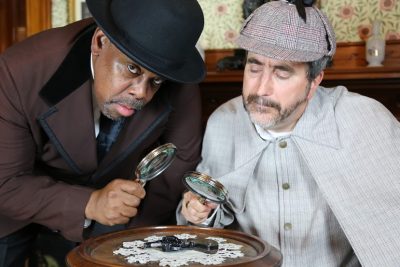 What do Lady Fitzbuttress, Cleopatra the cat, and Dr. Robert Jeffers have in common? They are all involved in murder! In Candlelight Theatre’s spring production at the Benjamin Harrison Presidential Site you will experience a trilogy of one act plays filled with mystery and murder – as well as chaotic and comedic twists! Each play is performed in a different room of the mansion complete with candlelight, historical artifacts, and the rich ambiance of President Harrison’s original furnishings.

You will see An Inspector Answers by Norman Phillip Hart in the back parlor. The story unfolds as Lady Fitzbuttress disappears and the Inspector accuses her husband, Reginald, of murdering her. Thus begins a series of single, double, and triple crosses that will have your head spinning like a top on a merry-go-round. Keeping pace with who is who and what is what will keep you entertained all the way to its comedic tragic end.

The dining room sets the stage for A Nice Little Kitty by Pat Cook. Walter and Edna Herbert vie for the love of their gargantuan fifty-seven pound cat, Cleopatra. But who is going to come out on top of this cat fight? Pair this domestic mayhem with a clueless, yet persistent, policeman and a very lumpy couch and you have the makings of a comedy of accidental murder and obsessive cat hating. But who has the last meow?

In the attic, you’ll experience The Case of the Well-Staged Murder by Edith Meiser, adapted for the Candlelight Theatre stage by James Trofatter, based on the character of Sherlock Holmes created by Sir Arthur Conan Doyle. The famed duo of Sherlock Holmes and Dr. Watson must piece together the clues to the identity of the real villain who shot Dr. Robert Jeffers – clues that are too neat and tidy to be a random act of violence. Something is amiss and Sherlock Holmes plans to get to the bottom of it. Staged as a live radio show, follow Holmes and Watson as they track down the culprit.

Purchase your tickets today to see “who did it” in April! Performances will sell out – reservations strongly suggested.

Consider booking a private room for up to 20 guests – a great way to enjoy a night out with friends, family, clients, or co-workers!