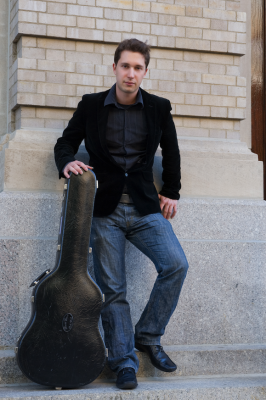 Jerome was the first guitarist to ever receive a Doctor of Musical Arts degree from the New England Conservatory of Boston. His doctoral dissertation analyzes how collaboration between composer and soloist achieved an optimization of the guitar’s capabilities in Robert Beaser’s Guitar Concerto (2009). Jerome earned his Master of Music degree magna cum laude at age 20 at the Conservatoire Royal de Bruxelles , studying with Hugues Navez. He then earned a Postgraduate Diploma at the Universität Mozarteum Salzburg , studying with the renowned masters Eliot Fisk and Ricardo Gallen. He followed the master courses of David Russell, Angel Romero, Pepe Romero, Emmanuel Rossfelder, Joaquin Clerch, and Pavel Steidl, among others. He also studied flamenco with the Spanish guitarist Antonio Segura in Brussels. Based in the Boston area, Jerome maintains an active private guitar studio made up of talented young guitarists and advanced adult players.

This concert is co-sponsored by the Indianapolis Society of the Classical Guitar.