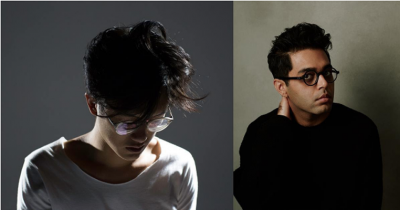 Presented by IUPUI Arts and Humanities Institute at Pioneer Indy

We are excited to welcome guest artists Ian Chang and Rafiq Bhatia to Indianapolis and the IUPUI campus this week. The two musicians will present a performance lecture at IUPUI during the day, and in the evening, they will perform at Pioneer.

About Ian Chang + Rafiq Bhatia
Drummer Ian Chang and guitarist Rafiq Bhatia are classically trained musicians and composers who make up two-thirds of the popular rock trio Son Lux. They each work heavily with music technology in their own compositions and within the group.

Ian Chang was born and raised in Hong Kong where he was shaped by the city’s diversity and vibrance. He moved to New York in 2007 to pursue music and quickly gained a reputation as a “gigantically talented drummer” (NPR). To date, Chang has recorded and/or performed with such varied artists as Son Lux, Landlady, Joan As Policewoman, Body Language, Matthew Dear, Dave Douglas, Rafiq Bhatia, Rubblebucket and Moses Sumney. See Ian Chang perform here: https://www.youtube.com/watch?v=CS7rDZhcHL0

Rafiq Bhatia is the first-generation American son of Muslim immigrant parents who trace their ancestry to India by way of East Africa. Early influences such as Jimi Hendrix, John Coltrane, and Madlib—as well as mentors and collaborators including Vijay Iyer and Billy Hart—prompted him to see music as a way to actively shape and represent his own identity, not limited by anyone else’s prescribed perspective. In 2012, Bhatia issued two improvisation-driven recordings whose surreal sonics “set them miles apart from the vast majority of records by jazz musicians” (New York Times). Bhatia has recorded with Son Lux, Lorde, Sufjan Stevens, Heems, and David Virelles, and on the soundtracks to the films The Disappearance of Eleanor Rigby, Air, and Afflicted. He has also recorded with members of the chamber ensembles International Contemporary Ensemble, JACK Quartet, and Alarm Will Sound. Learn more about Rafiq Bhatia here: http://www.rafiqbhatia.com/