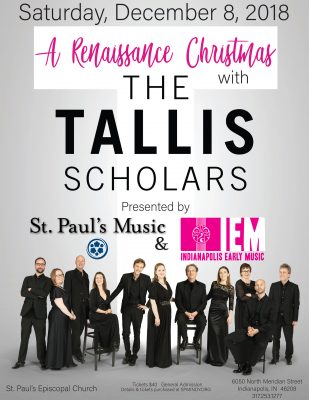 After five years, The Tallis Scholars (based in Cambridge, England) will again perform a concert at St. Paul’s Episcopal Church (6050 North Meridian Street, Indianapolis, IN 46208) on Saturday, December 8, 2018 at 7pm.

The Tallis Scholars specialize in performing a cappella sacred vocal music written during the Renaissance by composers from all over Europe. They are currently recognized as one of the world-leaders in this field, having risen to a place of prominence among other professional ensembles. Led by director Peter Phillips, The Tallis Scholars are “The rock stars of Renaissance vocal music.“ (New York Times). Producing music for over forty years and earning multiple award-winning recordings for Gimell, Peter Phillips and The Tallis Scholars have successfully established sacred vocal music of the Renaissance as one of the great repertoires of Western classical music through performances on every continent except Antarctica. The Tallis Scholars bring Renaissance music to a wider audience in churches, cathedrals and venues including the Royal Albert Hall, the Sistine Chapel, the Lincoln Center and Carnegie Hall New York, the Philharmonic Hall Berlin, Saint Mark’s Venice, Seoul Arts Centre Korea, Shakespeare’s Globe Theatre London, Concertgebouw Amsterdam, Wigmore Hall, Beijing Concert Hall, Megaron Athens and the Opera House Sydney.

Dedicating his life to the research and performance of Renaissance polyphony, Peter Phillips founded The Tallis Scholars in 1973. He has appeared with them in 2000 concerts and made over 60 recorded discs developing interest in polyphony all over the world. “Speaking of birds, it was also wonderful to glimpse Peter Phillips’s conducting: hands opening as if setting free a dove, or closing to punctuate with dotting-the-i’s exactitude. I found myself wishing I could get a choir’s-eye view to witness Phillips’ complete – lifelong – inhabiting of this music.”  (The Observer, September 2015). Peter Phillips has worked with the ensemble to create, through good tuning and blend, the purity and clarity of sound which he feels best serve the Renaissance repertoire, allowing every detail of the musical lines to be heard. It is the resulting beauty of sound for which The Tallis Scholars have become so widely renowned. [“one of the UK’s greatest cultural exports” (BBC Radio 3)]. This concert is sponsored by St. Paul’s Music and Indianapolis Early Music. Tickets are $40 and can be purchased via brownpapertickets or by visiting spmindy.org.

All seating is general admission. Tickets are $40 and can be purchased by clicking here. If remaining tickets are available, tickets may also be purchased at the door the night of the show.