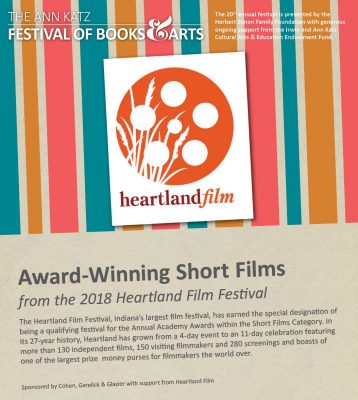 ZION (Best Documentary Short Film winner and Academy Award-qualifying)
Zion Clark was born without legs. His birth parents abandoned him at the hospital, he spent almost his entire adolescence in foster homes, yet he is one of the most positive young men you’ll meet. Zion began wrestling in second grade. It became a therapeutic outlet, provided a sense of family, and became the only consistent thing in his childhood.

THE BURDEN  (Best Animated Short winner)
A dark musical enacted in a modern market place, situated next to a large freeway. The employees of the various commercial venues deal with boredom and existential anxiety by performing cheerful musical turns. The apocalypse is a tempting liberator.

ABU ADNAN (Best Narrative Short winner and Academy Award-qualifying)
Sayid, a refugee doctor from Syria, has just received a Danish residence permit and is about to embark on establishing a new life in rural Denmark together with his son Adnan. At the same time as having to learn a new language, he faces the challenge of maintaining his boy’s respect in a situation where Adnan’s assimilation seems to be going somewhat faster than his own.

THE DRIVER IS RED (Audience Choice Winner- Animated Short)
Set in Argentina 1960, this true crime documentary follows the story of secret agent Zvi Aharoni as he hunted down one of the highest ranking Nazi war criminals on the run.

THE HAPPINESS MACHINE (Audience Choice Winner- Documentary Short)
Carl grew up a sharecropper on 22 acres in rural Iowa, which he now calls The Promised Land. A philosopher, inventor, and farmer, he shares with us the deeply intricate workings of his projects, (including a full span bridge he built with his hands), how they are connected to the land which was given to him as a promise, and what he hopes to pass on to his children as the gift of place.

Part of the Ann Katz Festival of Books and Art.

The Ann Katz Festival of Books and Arts is made possible with generous annual support from the Irwin and Ann Katz Cultural Arts and Education Endowment Fund. Major sponsors this year (as of 7/24/18) include Penrod Society, Inc., Fifth Third Bank and Cohen Garelick & Glazier. A complete list of all festival sponsors can be found on the JCC’s website and are updated regularly. Sponsorship information can be received from Lev Rothenberg, JCC Cultural Arts Director, 317-715-9223 and  lrothenberg@jccindy.org.

Registration for this event is $10 and can be purchased in advance at https://jccindy.org/community/festival-books-arts/, at the JCC Membership Desk, or at https://www.eventbrite.com/e/heartland-award-winning-shorts-tickets-51969848215. Tickets will be available at the door until the event is sold out.