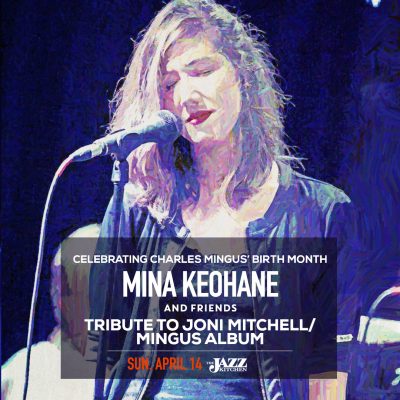 Presented by Indy Jazz Fest at The Jazz Kitchen

Join vocalist/composer Mina Keohane and friends in celebrating Charles Mingus’ birth month as they perform the music from Joni Mitchell’s “Mingus” album + additional incredible Mingus compositions. Mingus’ collaboration with Joni Mitchell was his final musical project before his death. Joni Mitchell says in the album liner notes: “The first time I saw his face it shone up at me with a joyous mischief. I liked him immediately. I had come to New York to hear six new songs he had written for me. I was honored! I was curious! It was as if I had been standing by a river – one toe in the water – feeling it out – and Charlie came by and pushed me in – Sink or Swim..”

The experimental album was wholly dedicated to his honor and memory.

Mina is an award-winning commercial and film composer/performer residing in Indianapolis, IN. She keeps busy by singing and playing keys/accordion with Jeff Kelly & the Graveyard Shift, Sarah Grain & the Billions of Stars, Nashville-based touring artist Brandon Whyde, The Dopacetics, and her own band Mina & the Wondrous Flying Machine. She has had the privilege of opening for many wonderful artists including Becca Stevens, Nathaniel Rateliff & the Nightsweats, Blues Traveler, Dwight Yoakam, Esme Patterson & Robby Krieger.